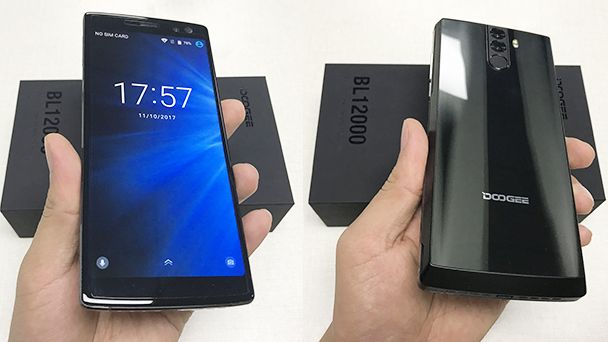 The latest flagship phones are equipped with high-end features like 8GB RAM, 256GB internal storage or 21MP camera but the battery capacity of the phone is also equally important. So far, the maximum battery available in few medium priced Chinese phones is 5000mAH. A smartphone with 8GB RAM may be powerful and fast to operate but superb battery life will definitely impress many smartphone buyers. The upcoming phone Doogee BL12000 with massive 12000mAH and fast charging ability will not be a disappointment at all as it can be fully charged in just 4 hours.

Chinese smartphone manufacturer Doogee has recently launched a powerful smartphone called Doogee BL12000 having a gigantic 12000 mAh battery which can be fully charged in only 4 hours owing to its super fast charging feature. This 6-inch device looks attractive with thin bezels on the sides. The phone is quite thick and heavy having dimensions of 162 x 74.7 x 14mm and weighing 300 grams because of its mammoth battery. It is available in two colour options - Black and Blue and comes with FullView FHD+ display with 2160x1080 resolution providing enhanced gaming and viewing experience to the users. The phone packs dual front and rear cameras. The dual camera setup on the back comprises of a 16MP primary camera and a 13MP secondary sensor hence ensuring depth-of-field effect. On the front panel, it sports a 16MP sensor along with an 8MP wide 130-degree angle lens which is best suited for taking group selfies of upto 10 people. Just below the camera, it features a rear-mounted fingerprint sensor and also comes with a facial recognition technology which is referred to as "Face ID."

In terms of hardware specifications, it is powered by an octa-core MediaTek MT6750T processor coupled with 4GB of RAM, ARM Mali-T860 MP2 GPU and 32GB of storage, which is expandable up to 256GB via a MicroSD card. The device boots on latest Android 7 Nougat operating system.

This smartphone can be purchased from Doogee's official store in China or Banggood for approximately $179.99 bt it is yet to be launched in India.