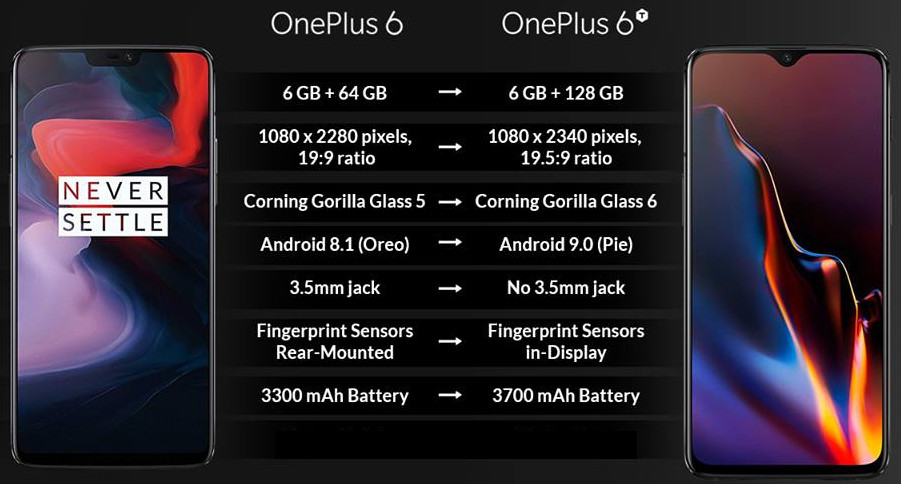 The Chinese handset manufacturer OnePlus has recently unveiled their latest flagship device OnePlus 6T in a press event. It will be available for purchase from November 1 at a price of Rs 37,999. OnePlus 6T comes with few upgrades such as an in-display fingerprint sensor, a waterdrop-style notch, a bigger 3700mAh battery and improved camera performance as compared to its predecessor. In terms of configuration, both the devices are powered by an octa-core Qualcomm Snapdragon 845 SoC, coupled with an Adreno 630 GPU, 6GB/ 8GB of RAM and 128GB/ 256GB inbuilt storage. The OnePlus 6 has an additional base variant with 64GB of storage. Both of them feature a 16MP+20MP dual rear camera and 20MP front facing camera.

Let us check out the differences in OnePlus 6 and OnePlus 6T specifications.

OnePlus 6T is backed by a bigger, non-removable 3700 mAH battery with dash charging feature which can charge the device to full capacity in 30 minutes. While OnePlus 6 comes with 3300 mAH battery backup with quick charging feature. The company has renamed its fast charging technology as OnePlus Fast Charge from now onwards.

Though the camera resolution of both the devices is same but new OnePlus 6T camera is equipped with Nightscape feature which can convert your night shots into brighter and picturesque images. Other additional features include Super Slow Motion video capture (1080p videos at 240fps and 720p videos at 480fps), enhanced HDR mode and improved portrait mode.

The new Smart Boost feature incorporated in OnePlus 6T increases the cold-start speed of the apps by around 20% by storing the data from frequently used apps in the RAM so that the processing speed remains unaffected.