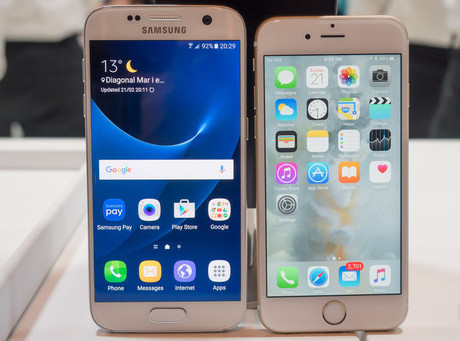 Samsung is Apple's closest and most direct rival in the mobile space and both of them have recently launched their flagship smartphones with high-end specifications and features. Which is better - Samsung Galaxy S7 or Apple Iphone 6s? Our detailed review and comparison will help you in taking a right buying decision.

Both the flagship phones sport similar design as their predecessors with minimal changes. They feature aluminium unibodies with glass screens and curved edges. Iphone is lighter and slimmer having 7.1mm thickness and 143g weight as compared to 7.9mm and 152g weight of S7. In terms of display, S7 surpasses iPhone device with bigger 5.1 inch screen and higher 2560x1440 resolution wheras iPhone comes with 4.7 inch screen diplay supporting 1334x750 pixel resolution at 326ppi. However, iPhone 6S is available in twice as many color options than Samsung Galaxy S7. One of the prime feature of iPhone 6S is its 3D Touch technology which senses the pressure with which the screen is pressed in different ways by user.

With 6S, Apple has doubled its RAM to 2GB. This increased RAM along with new A9 dual-core processor and optimized iOS makes the iPhone 6S a powerful device ensuring smooth and lag-free performance. On the contrary, Samsung S7 is packed with new Snapdragon 820 or its own Exynos 8890 processor giving tough competition to iPhone 6S, although Android operating system may not be as streamlined as iOS. S7 is available in 32GB/64GB/128GB model with an expandable option upto 200GB via microSD card wheras iPhone 6S lacks microSD card support and offering multiple storage options- 16GB, 64GB, 128GB.

Also read : Apple iPhone 6 Vs iPhone 6S : Should you upgrade?

Iphone is a suitable option if u wish to have the latest features like Live Photos and 3D Touch but in case the performance is the criteria, no one can beat Galaxy S7 with its robust and powerful configuration equipped with best camera and screen with high pixel density and resolution. Its more of a personal choice whether user wants to opt for Android operating system or iOS software as iPhone loyal users are not much bothered about QHD panels and 4GB RAM and will prefer sticking to iOS software.